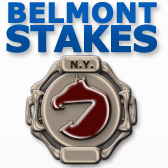 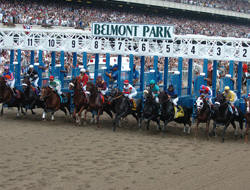 Welcome to the 2021 Belmont Stakes. We trust you enjoy the races and find something useful on our website.

YES. It HAPPENED. Justify and Mike Smith become Triple Crown Champions - the 13th in over a century! With a winning time of 2:28.18, Justify won handily wire to wire. Thanking Jesus Christ, after the race, Mike Smith became the oldest winner of the Triple Crown. Big Money Mike has been riding before he could walk! He is a humble man and a super athlete. And we congratulation him, Bob Baffert and all the connections of Justify!

Justify handily won the Kentucky Derby. Concerns over a bruise proved to be nothing when Bob Baffert sent the plucky colt out to to Pimlico and what proved to be a muddy and FOGGY Preakness Stakes. In fact, you may have wondered if your TV had problems as the fog was so thick that it was difficult to see the horses! In the end, Justify triumphed and is one of 36 horses to lay claim to winning the Kentucky Derby and Preakness Stakes.

In 2015, history was made when we witnessed a Triple Crown victory by American Pharoah and Victor Espinoza.

In 2014 we saw Victor Espinoza ride California Chrome in what many hoped to be end to the Triple Crown drought. However, much like the brown and burnt lawns in California, Victor and and California Chrome came up dry and couldn't manage to make it rain; and once again, fans were let slack-jawed with what might have been.

In 2014, California finished a disheartening 4th place to the winner Tonalist. There is a list of infamy for horses who were eligible to win the Triple Crown but then did not manage to win-- the horses who won the Kentucky Derby and Preakness Stakes but who lost the Belmont Stakes. Thankfully, American Pharoah's name was not to be added to this list and instead both Espinoza and AP become immortal and ended the break in Triple Crown victory's since 1978 when Affirmed won.

Where is the Belmont Stakes?
Belmont Park in Elmont, New York.

Because of its distance and status as the race that can make or break a Triple Crown champion, the Belmont Stakes has been the venue for some of the most famous moments in American racing.

The Belmont Stakes, the final and most demanding leg of the Triple Crown, is named after August Belmont who had been a leading banker and racing man of the 19th century. He was also the first President of the Jockey Club in 1867. In 1869, August Belmont took first and second money with his own Fenian and Glenelg. 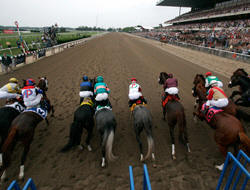 In 1993, Julie Krone became the first female jockey to ever win a Triple Crown race, when she guided Colonial Affair to victory.

Secretariat's amazing 31-length victory in the 1973 Belmont Stakes established the world record for a mile and a half at 2:24. With his win in the Belmont, he became the ninth horse to capture the Triple Crown.

Twenty-six horses have been eligible to win the Triple Crown coming into the Belmont Stakes and eleven have succeeded. In the last three runnings, horses that won the Kentucky Derby and Preakness (Silver Charm, Real Quiet, and Charismatic) were denied racing immortality in the Belmont Stakes. Racing has not seen a Triple Crown champion since 1978, when Affirmed swept the three-race series.

A crowd of 85,818, the largest in New York Racing history, attended the 1999 running, hoping to see Charismatic become Racing's 12th Triple Crown winner. Unfortunately, during the stretch run, the colt suffered a condylar and sesamoid bone fracture in his left foreleg, and finished third.

Over the years we have seem triumph and defeat with suprise finishes. Who can forget Big Brown -- favored to crush the field-- finish his Triple Crown in last place. In 2009, we witnessed Summer Bird triumph over his kin-- Mine That Bird.

Brief History of the Belmont Stakes

The first Belmont in the United States was not the famous stakes race or even the man for whom it is named. Rather, the first Belmont was a race horse that arrived in California in 1853 from his breeding grounds of Franklin, Ohio. The Belmont Stakes, however, are named after August Belmont, a financier who made quite a name and fortune for himself in New York politics and society. Obviously, Mr. Belmont was also quite involved in horse racing, and his imprint is even intertwined within the history of the Kentucky Derby.  More History of the Belmont Stakes. . .

In 1890, the Belmont was moved from Jerome Park to Morris Park, a mile and three-eighths track located a few miles east of what is now Van Cortlandt Park in the Bronx. The Belmont was held at Morris Park until Belmont Park's opening in 1905.

Here's a tidbit you didn't see in Derby or Preakness history. When Grey Lag won the Belmont in 1921, it marked the first running of the Belmont Stakes in the counter-clockwise manner of American fashion. This 53rd running was a mile and three-eighths over the main course; previous editions at Belmont Park had been run clockwise, in accordance with English custom, over a fish-hook course which included part of the training track and the main dirt oval.

The first post parade in this country came in the 14th running of the Belmont in 1880. Until then the horses went directly from paddock to post.

A total of eleven Belmont Stakes winners have sired at least one other Belmont winner.

Man o' War heads the list of Belmont champion sires. Not only did he win the race himself in 1920, but three of his subsequent sires won it as well: American Flag in 1925, Crusader in 1926 and War Admiral in 1937, who went on to win the Triple Crown.

1977 Triple Crown winner Seattle Slew sired a Call To The Derby Post favorite in Swale, who won both the Derby and the Belmont in 1984, as well as A.P. Indy, who won the Belmont in 1992. 1999 Belmont winner Lemon Drop Kid is also a descendant of the Slew.